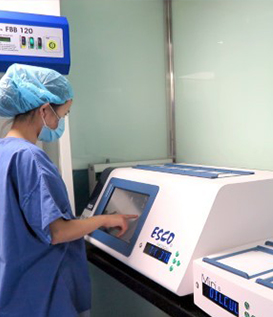 so that odd numbers of cells may be present.

During blastocyst formation, two clearly distinguishable cell lines are formed, namely the trophectoderm and the inner cell mass. In humans, the proliferation of the latter was found to be 1.5 times lower than that of the trophectoderm. Similar to the developmental stage of the blastocyst on days 5 and 6, which may range from a retarded morula to an expanded or hatching blastocyst, high variability in cell number has been observed.

A full human blastocyst at day 5 of development should exceed 60 cells and should at least have doubled its cell number on day 6. It should be noted that blastocyst formation in vitro is not a reliable marker of chromosomal balance since certain genetic aberrations are compatible with good morphology at the blastocyst stage. Expansion of the blastocyst and appearance of both cell lineages were taken into account for scoring blastocyst morphology and were successfully used in an IVF program.

According to this grading system, viable blastocysts are characterized by a cohesive trophectoderm composed of numerous sickle-shaped cells as well as a tightly packed inner cell mass. In detail, such top quality blastocysts showed implantation and pregnancy rates as high as 70 and 87%, respectively, in double blastocyst transfers and 50 and 70% in single transfers. It turned out that the expansion of the blastocyst on day 5 is the less predictive parameter in terms of implantation. Nevertheless, other investigators reported the highest viability in day 5 blastocysts, which were expanded and derived from day 3 embryos of adequate blastomere number (7–8 cells).

This slight divergence may be explained by the simple fact that the quality of inner cell mass can only be evaluated from full blastocyst stage onward, whereas morula and early blastocyst stage does not allow for detailed inner cell mass scoring. The size and shape of this cell lineage, however, was highly predictable in terms of implantation and pregnancy.